I have been doing creative writing during my Covid 19 time away from Blogger. I thought it was about time to share some of it. This is fiction.  I hope you like it. B 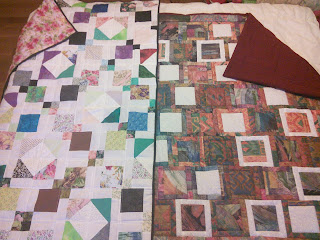 Clara tugged at the tattered old quilt. Betty yanked it back. The quilt was one their mother had put together years ago. Pieces of old jeans, shirts and an old curtain that used to hang in the small kitchen were sewn together with love. Clara wondered how that curtain had held the winds at bay in that window when it did not provide the same courtesy here on this old bed. Clara could smell a mix of cigarette smoke and wood smoke combined when she covered her head to keep the cold draft away.

Betty started to stir again. Clara could hear her stomach growl. The pantry window was just above their bed. Clara quietly slipped through it unnoticed and grabbed some gingersnaps out of the bag. She scurried back through that pantry hole much like the mice that would run across the floors at night.

Betty turned back to face Clara and asked, “Did you get me one?”

It was their little secret. Every night, that hole had become the guilty pleasure they needed to keep hidden from their brothers. Everyone was hungry.

The arguing coming from the other side of the kitchen that was steps away from the pantry continued. Their parents would not hear Clara scurry through the hole. They were arguing again. About money, again. Clara knew that when she grew up that she would never do that. It was always the thing that upset the house. The thing that flipped her fun-filled days into nightmares and stress all night. Betty and Clara would huddle together under that old blanket and cry silently. The cookies became part of their secret that soothed.

Betty drifted off to sleep. Clara was wide awake.

Beside an old dresser painted blue with the missing bottom drawer was a box. Clara bolted upright. There sat Victoria. Victoria had been coming into visit ever since Clara and her family moved into the old house near the church. She must have slipped into the room while Clara had her back to the curtain on the doorway.

Betty had never met Clara. Victoria was Clara’s friend, and she did not want to share her with Betty. Victoria told Clara the first time they had met that she would always listen to Clara and help her get to sleep.

Clara, on the very first night of the move into that old house, had been lying in bed with Betty when the fighting began. The voices were their parents, but Clara heard strange voices coming from the other side of the wall. This old house was attached to another house. The family that lived there had just as many kids running around as Clara’s family. Clara assumed that the parents were fighting over money just like her parents. Clara and Betty most nights would cry themselves to sleep. Victoria visited Clara every night for a month.

One night, Clara wondered how long Victoria had been sitting there. The yelling next door became even louder than her parents own screaming at each other. Clara wondered how Betty could sleep through it. Victoria never came when Betty was awake, so Clara was happy that Betty had fallen asleep. Victoria smiled. Clara started to tell Victoria about her fears. Victoria told her that everything was going to be alright.

A crash came from the other side of the wall. It shook the wall beside where Victoria sat. Victoria sat still. Victoria had told Clara she was ten. Clara told Victoria that she was seven. Victoria started to softly sing. ‘Mares eat Oats’. That song was Clara’s mother's favourite. Her mother sang that when she was sad, and it always brought her back to happiness. Clara thought of it as a magic song.

Victoria always wore a long flowery dress with ruffles on the bottom. She had braids in her hair and a bow that matched her dress. Clara started to hum along with Victoria.

Another large bang against the wall and then all was quiet. Clara drifted off to sleep.

Early morning, there was a lot of shouting in the kitchen and then the screen door slammed. Betty and Clara ran outside to see all the surrounding neighbours that stood on their lawn. Clara wondered what happened. There were police cars parked on their lawn on the other side. Clara’s Mom ushered all the kids back into the house.

Clara heard one of the neighbours’ whispers to her mother,

“Poor Victoria what will become of her?”