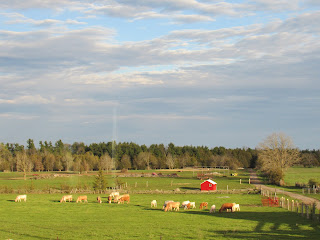 The television blared. This had become the new normal in our house since the end of March. That was when the world, as we knew it, began to unravel. The summer of 2020 seemed as though time had moved so quickly that parts of it went missing. That is not unusual on the farm. It is the season that time does pick up speed and race. With so much to do, our time has never been marked by the clock but by the completion of jobs that needed to be done. As I age, all the seasons seem to rush. This year seemed quite different. The television that blared captured the mind with images and talk of things that could not possibly be but were.

Early mornings with a need to know, by my husband (fondly known as My Hero) had the television grab hold of him and hold him captive. Along with his need to know the weather, (which was important to every farmer), the news crept in and ultimately stayed in the house.

This farm girl would sip coffee and write her thoughts down. Just before dawning her thoughts had always seemed clearer. The kitchen table, the big kitchen window with a view that makes her happy have been her inspiration for as long as she could remember. The aroma of freshly brewed coffee soothed. Fresh air, and if we were lucky a cool breeze would blow through the open windows. All blended, that was the part of the day that gave hope and the strength and to conquer her world.

The television blared another heat warning. Once again, the unbearable humidity was predicted by the weatherman. The unrelenting heat and humidity had held us captive for weeks. The windows were shut and locked, and the drapes were drawn. We, in turn, tried to hold tight to the cool air that had entered while we slept. The captive became the captors.

Along with that heat and humidity came the holding back of rain. The pastures looked like fields of wheat. Golden brown. The tall weeds and grass not grazed, burned, and became brittle and no longer desirable to the cows that roamed. Scattered showers would become the new normal. Heavy rains in one area would completely miss another. The farm girl started to watch that television closer every morning and evening. The weather had made those unforeseen changes of 2020 even more challenging.

A map on the television showed scattered showers. Large and small green patches scattered across the province were supposedly pockets of rain. My Hero and I would factor in the wind direction and hope that some of those pockets of heavy rain would hit us. The thought of damaging winds and too heavy of rain did not enter our thoughts. The rain no matter how it came at this point would be welcomed. The farm girl decided that every green patch on that map, on the television was like a scratch ticket. Someone, somewhere, was going to win the lottery of rain. We needed to win that lottery. Our cows, our crop of hay, and our sanity all depended on the luck of a green mass, on a map, on that darn television.

The thing about having a huge back window to stare out of is that it gives you a vantage point to see where those lottery tickets and winners were situated. Yes, we would watch day after day where black clouds would skirt along Lake Ontario and drift to open land. We watched as flashes of lightning bolts, along with misty horizontal streaks of rain gave us hope off in the distance. Some days it would move far enough north to where we waited. It would rain for a few minutes. Never a big win.

There had even been times where the thunder, the lightning had your heartbeat race in anticipation. Alas, a rainbow with no rain was your prize. In the end, another loser.

The day, we had tried to avoid had come. We had to move our cows to the hayfield. This meant that no second crop would be harvested from it. Early morning the cows followed us to the gate and raced through. Heads down, they munched quickly. Sweet bunches of clover dangled from their lips as they danced and roamed through the hayfield, now a pasture. All they desired was laid out in front of them. There was no need to search now. The buffet table was full, and they only needed to pick what they wanted. They were happy. 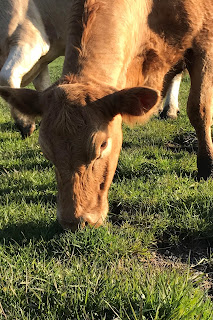 At suppertime, the weatherman showed a huge green mass that would certainly hit us, but we had been there before. We “battened down the hatches” meaning we locked everything up tight and secured those things that those heavy damaging winds (the travel companion of the rain) would certainly carry away when it left. We sat at that kitchen window and waited and watched. This was going to be our lucky day. The television had finally passed on some good news. One more scratch of that ticket. This was the one.

The thunder roared, the winds picked up and rattled the metal on the roof of the barn and the house. The trees had been waiting for this to happen. They danced and their branches touched the ground. They knew.

A clap of thunder and a lightning bolt, that surely hit the ground in the bush, was the switch that had the sky open. Torrential rains hit the back window and slammed the steel on the roof. It was deafening. The darkness of the outside and the noise were frightening. A tear ran down my face. A tear of happiness. We had finally scratched the right green dot and had won the lottery.

It rained that night and most of the next morning.

The heat and humidity eventually returned. The cows returned to behind the house. Their old pasture became a bit greener, then dry again. We were back to watching the weatherman and his map of predictions. Those green dots are fewer and far between. The cows roam back and forth from the pasture fields that are still holding up, for now. The hayfield that they were let into just before our win will not be harvested for the second crop. It is holding up as pasture. It was worth the sacrifice of bales if only to hit the lottery. They are happy, we are happy.

Grace Vanderzande is a farmer and a writer who still awaits another win. (Published July 2020)