This story is in the last print edition of a newspaper I have been contributing to since 2013. The Napanee Guide.
I  wrote a farewell column, but it was not to be used.
This newspaper, like so many other small-town newspapers, will now be only online.
I have agreed to continue to contribute to the online version. I have also agreed to contribute to the online and print edition of The Kingston This Week. I am grateful to be able to get my stories out there.
I hope you enjoy this one. Grace 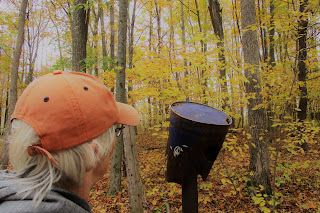 There was no turning back now. I put my glasses back on. The first thing I saw was a snowy white mix with the odd black strands of hair, all jumbled in the bathroom sink. How bad could it be?

I looked up, and into the mirror.

Well now, except for one "oops," it was not too bad. After all, with the pandemic lockdown, the only person to see it would be my husband (fondly known as My Hero). I barely left the house. He is quite used to my need to acquire new skills. "Acquire", could be a bit of a stretch. 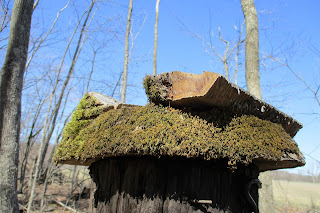 There have always been those skills that have never amounted to any real skill at all. Others may think of them as hard lessons learned. Most of those involved farm duties. I can hear some farmers out there actually let out a sigh. They know from experience that acquiring skills takes guts and determination. You will always stay until you figure it out. One way or another, you will either become very good at it or in my case, good enough. Jobs need to be done, and if you’re the only one around you must figure it out.

There is one incident that still sticks in my mind. It was early spring. My Hero was at his off-farm job and I was doing the farm chores. Due to a lack of manpower​,​ ​we​ had ​bought​ a round baler. Then, we decided there was no need to square bale anymore. Yes, sometimes, I suppose, you may forget the reason why you needed something, in your excitement for less work.

Someday, it will inevitably hit you.

It was calving season and we had two cows in the barn, with their two calves. Most of our cows calve outside with no problem but sometimes you have problems. Both cows had decided to not feed their calves. That happens sometimes, especially with first-timers. We left them in the barn so they would not get distracted. Also, I could make sure their calves were getting enough milk from nursing.

That day, as per usual, I headed out to check the cows and calves. We had used the last two square bales of hay, the day before. I was convinced that these cows still needed at least a week with their calves. I had a brilliant idea.
Why could I not pick up a round bale and shove it through the barn door? From there, I could strip off layers to feed the girls as I needed. 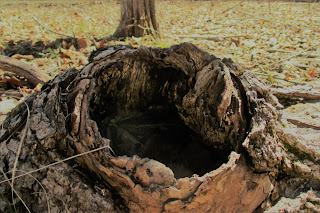 I watched as both of those cows let their calves nurse. Not for very long, but it was a start. I walked out to the barnyard, started the tractor, and then went to pick up a round bale. I must tell you that this was a time before our tractors Big Red and Little Red. I was a novice tractor operator, at best. It was a Case IH 885, with lots of horsepower. Possibly, it had too much power for the job I was trying to accomplish, as a rookie.

I picked up the bale. Then, I centered the bale between the open barn doors. This would surely work. There was lots of room. I exited the tractor to make sure. The cows were standing in their pens mooing with excitement. I could also smell that sweet alfalfa. 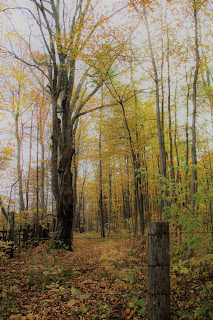 Back inside the tractor, I slowly inched the bale through the door, I lifted the loader, ever so ​slightly. The 885 lunged forward. My foot had slid off the clutch. Crash--Bang.
Suddenly, an orangish-brown liquid squirted all over my windshield and covered the tractor. Then, it dripped unto the ground. I panicked.

I pushed the throttle down and backed up, which made it squirt out more. I shut down the 885. That stopped the squirting, but it was still dripping onto the ground. I jumped out of the tractor. First, I noticed a big chunk out of the overhead beam on the barn. I could see a dripping broken hose. It was an environmental nightmare. I ran to grab a huge ​flattened ​cardboard box, and a couple of buckets, that were in the shed. I slid them under the tractor, to catch the drips. The cows mooed, reminding me that I had a job to finish. The bale was sideways, half-way through the barn doors. My way in was blocked. I ran to the house to phone for some help.

My brother-in-law came to my rescue. I was so lucky that he was home. He replaced a hydraulic hose. He topped up the hydraulic fluid and then he helped me clean up the ground and tractor. When that was all done, he moved that bale into the barn. He even helped me feed the cows. He is awesome like that. 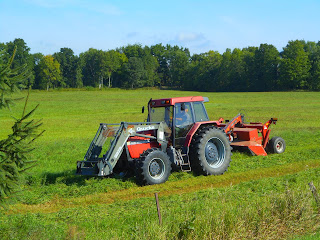 When everything was all said and done, it worked out fine.  I later learned that the hydraulic pump was to blame for all the squirting. When I had shut off the tractor​,​ the pump stopped pumping. Sure, there is still a big chunk of wood out of the barn beam over the doors. I notice it every time I walk under it. The 885, years later, was traded for a Case IH JX100U (Little Red). We never did bale any more square bales, for ourselves. I eventually figured out how to get those round bales through that door with Little Red’s help. 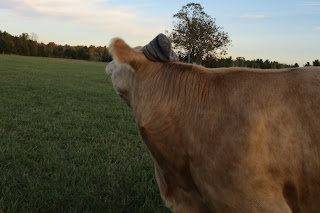 New skills were acquired that day. So, on this day, I cut my own hair. You are never too old to try new things that need to be done. All you need is a bit of courage. Possibly, a backup plan. You know, like a bailout person​ that​ you can phone​,​ or a hat.